In your professional practice, to meet your missions and obligations, you can count on the knowledge, know-how, centimetric precision and repeatability provided by the Orphéon network.

The high precision that the GNSS RTK Orphéon network provides daily to surveyors or topography professionals, allows quality surveys to be carried out with confidence, but also facilitates and simplifies the management of construction sites or interventions in the field.

Positioning accuracy with Orphéon is centimetric for a standard deviation of 1σ:

The fact of working in a network makes it possible to obtain, in a few seconds, a homogeneous precision on all the zones covered, whatever the distance separating the mobile from the nearest station. The system is compatible with the vast majority of mobile receivers on the market insofar as the corrections are broadcast in standard formats: In a standardized format (RTCM3) or in well-defined proprietary formats (CMR/CMR+, MAX, iMAX, LB2) According to network calculation concepts, which are also well defined and standardized (MAC).

For metropolitan and continental France, the legal geodetic system is RGF93v2b which is aligned with ETRF2000 epoch 2019.0.

All of our station coordinates are defined in this system. The associated ellipsoid is GRS80.

The legal projection is the Lambert 93 9 zone conformal conic projection. Each of these zones covers a latitude band of 2°. The titles of the 9 zones are:
CC42/CC43/CC44/CC45/CC46/CC47/CC48/CC49/CC50. “CC” for conformal conic followed by the value of the zone’s central parallel. For example, CC48 covers a band in latitude going from parallel 47°N to parallel 49°N. The definition of these 9 zones ensures an overlap of 1° between each zone.

The parameters of these projections are:

In terms of altimetry, the legal system is IGN69, for mainland France, the RAF20 altimetric conversion surface was updated at the end of 2021 to take into account the maintenance operations of the RGF93 reference mark.

Since the summer of 2021, you can therefore download this new ‘grid’ from the IGN website (https://geodesie.ign.fr) which takes into account both the evolution of the RGF93 benchmark (ETRF2000 ep.2019.0) and the last two ERNIT field campaigns 2019 and 2020 in mainland France. IGN also tries to improve the model at each occurrence by introducing some minor corrections resulting from reports or redeterminations caused by local tectonic activity.

For mainland France, the RAF20 altimetric conversion surface was updated at the end of 2021 to take into account the reference frame maintenance operations RGF93

For the West Indies :

The RGAF09 (Réseau Géodésique des Antilles Françaises 2009) thus replaces the WGS84-RAAF91, which remains however usable for an overlay period of three years.

Example of a survey carried out with the real-time GNSS ORPHEON precision increase service on the RBF 6927001-A terminal for 30 minutes with one point per second. 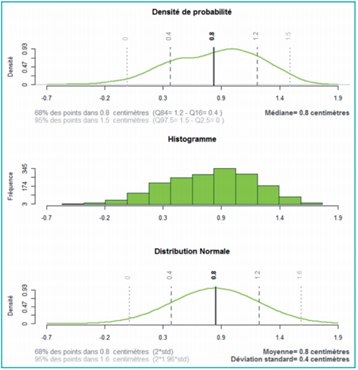 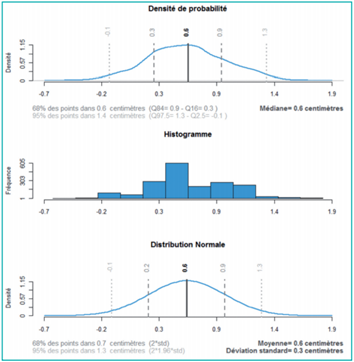 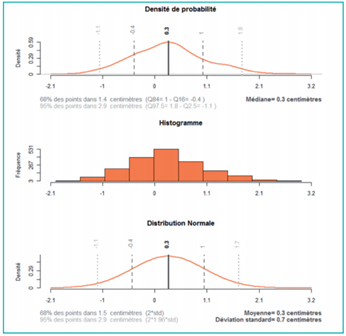 Figure 3. Descriptive statistics of the deviation from the coordinate published on the IGN69 Altitude component of the NRTK ORPHEON survey of 1800 points (30 minutes). Equating the statistical distribution to a normal distribution, the accuracy is 3 mm with a one-sigma (standard deviation) precision of 7 mm.

The popularization of positioning techniques generates certain drifts insofar as all users are not or no longer necessarily aware of the phenomena involved in precision GNSS positioning and do not or no longer have the necessary hindsight on their equipment to work optimally. We thought it appropriate to recall a few recommendations for obtaining quality measurements with a certain level of confidence.

it is also recommended to save the raw data in static as in itinerant in order to be able to recalculate in post-processing the whole of the chain kinematics measured from data observed on the stations of your real-time operator and/or those of the RGP, NPPK (Network Post Processing Kinematic) method. You will also find an article published in XYZ on the subject Real-time static positioning by “filtering and averaging NRTK positions” This method of measurement makes it possible to ensure the quality of the points recorded. 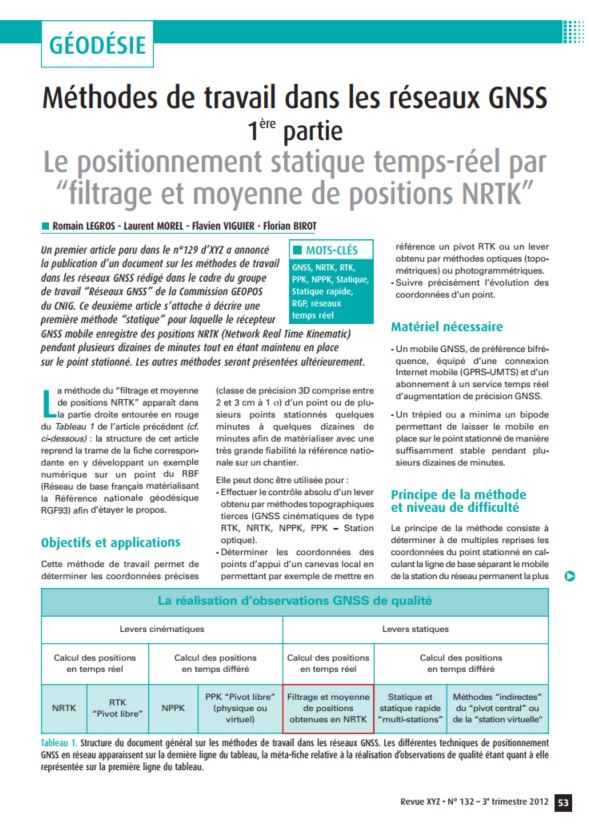 The positioning accuracy of a satellite navigation system (GPS) is affected by mathematical errors related to the geometry of the observable satellites either because of their position and their distribution above the user. which can be defined as:

The idea of ​​Geometric DOP (GDOP) is to indicate how measurement errors will affect the final state estimate.

DOP can be expressed in a number of distinct measurements :

In various theses on “TOPOGRAPHIC WORKS” it is highlighted that the use of a “real time GPS” is sufficient for the realization of topographic works of class of precision 10 cm within the meaning of the decree of September 16, 2003 (Class A), only within the limits of use of the equipment (pay attention to the close environment) and the limit of implementation of survey methods (see our field phase recommendations above). The new regulations reinforce the obligation to ensure the safety of the works by the project owner thanks to the precise location of the networks. Thus, all recipient operators of a work request (DT) will be required to transmit network location data so that the work can be carried out in complete safety. The networks will be qualified according to three accuracy classes:

When the work is located near sensitive underground networks (gas, electricity), class A location data will be required. Failing this, project owners will have to undertake additional investigations (IC) in order to have class A information. Operators will be required to integrate the results of these additional investigations into their databases and to carry out topographical surveys. new class A networks using a geo-referenced and pooled base plan. The regulations set new obligations for construction companies. These include:

A need for precision and geo-referencing

Because of this need for precision and geo-referencing, the detection equipment will have to be supplemented by a precision GPS. The natural position given by a GPS alone gives a good idea of ​​where it is within a few meters, but is not precise enough to achieve the necessary and requested precision. These GPS require a correction so that their precision is increased and usable within the legal framework imposed. The GPS implemented must make it possible to provide geolocation: These data will then enrich or update the GIS (Geographic Information Systems) data. Declaration of work near underground networks (DT DICT) Reminders : The work planned near pipelines and buried networks must be declared to their operators, before their execution, by means of the declaration of project of works (DT) by the client, and the declaration of intention to start (DICT) by the contractor. Any declaration must be preceded by a consultation of the one-stop shop, accessible online, which lists all the networks present in the territory.