For your short-term work or for your short stays in France, we offer a series of GPS correction services.

The Orphéon network is made up of nearly 220 observation stations, spread throughout the territory of mainland France and the West Indies.

All of our stations form a large balanced network that allows us to provide our many customers with RTK and PPK corrections to increase the accuracy of their GPS.

These various services are marketed exclusively on our website in the form of subscriptions or hourly packages specifically adapted to short periods.

Click on the links below to receive the corresponding subscription offer. 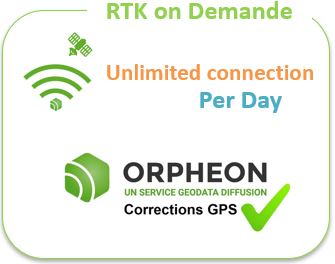 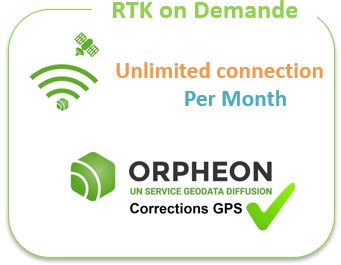 This is a volume of hours for access to the NRTK Full GNSS network correction network with repeatable centimeter accuracy GPS + Glonass + Galileo + BeiDou. Often used to discover our services.

This is a volume of hours (epochs) for accessing data from the network of Full GNSS Permanent Stations with centimeter precision (GPS, Glonass, Galileo, Beidou). Often used to control the accuracy of its measurements or even for areas where a mobile internet connection is not available for real time.

The RTK (Real Time Kinematic) is a device for transmitting real-time correction data from an observation base to mobile GPS through radio communication or via an internet connection.

The mobile will then integrate this information into its positioning calculation to gain precision.

The real strength of the Orpheon network

The NRTK (Network Real Time Kinematic) comes from the use of several bases of observations to optimize and model the information of corrections on the covered area.

The data from this network of observation stations is collected in real time on a centralized server. Mobiles connect to the server via mobile internet to get their corrections information.

PPK (Post Processing Kinematic) to post-process your positioning data with observation data from an observation station.

Raw positioning data (without corrections) is stored in the GPS in Rinex format along with satellite observations such as satellite ID, frequency (L1/L2/L5, etc.), constellation, pseudorange, carrier phase, Doppler and signal-to-noise ratios.

RINEX (Receiver Independent Exchange Format) as its name suggests is a standardized format for storing positioning and observation data independent of the brand of the receiver and thus allowing post-processing of this data afterwards to obtain corrected positions much more precise.

In your professional practice, you can count on the knowledge, the know-how and the centimetric precision of the Orphéon network to meet your missions and your short-term obligations.

Commissioning of the services ordered within 24 hours (excluding weekends and public holidays) after receipt of the subscription form correctly completed and signed.

The network has been thought out and designed according to the rules of the art, it is constantly monitored and checked regularly. (Le réseau-Orphéon).

We have developed a full range of high-end services so that you can choose according to your real need.

Full GNSS is the addition of the Galileo and BeiDou satellites to the GPS and GLONASS satellites, which allows you to significantly increase the number of satellites observed simultaneously by your GNSS antenna. With Full GNSS you work further and longer in wooded areas or bordered by buildings, where some satellites are hidden or even unusable by the equipment while maintaining a correct and precise geo-referenced position. Full GNSS also offers faster access to precise and more stable positioning thanks to the third frequency GPS and Galileo (L5) allowing easier resolution of phase ambiguities and rejection of multipaths.